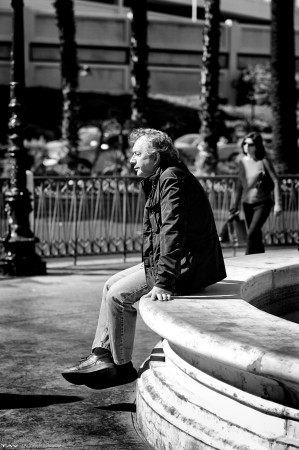 This is one of the best times of the year to be in Vegas. To steal from the Three Bears, “not too hot, not too cold, it’s just right!” So yesterday I decided not to waste the day, I headed down to the strip for a walk and some street shooting.

For this kind of outing I’ll typically grab my Fuji X100, but it had been a long time since I had taken my Canon and my 50mm f1.2 (magical glass!), so I grabbed the Canon and off I went.

Once I got there, right away I felt the lack of the invisible factor to Fuji provides. When I’m shooting with that camera it’s very easy to go around shooting anything while being completely ignored. No one feels threatened by the looks of that camera.

The DSLR is a different matter. People were more aware that I was around them taking photos with a camera that has a look that says, “He must be a pro, or paparazzi! Better keep an eye on this guy!” It didn’t bother me though and I had a great day, and even got a few shots that I like.

I usually shoot with this lens wide open, but today I decided to stop it down a bit and actually get a few things in focus. I actually even took a couple shots that I love in color! 😉

Click on an image to see the larger version.