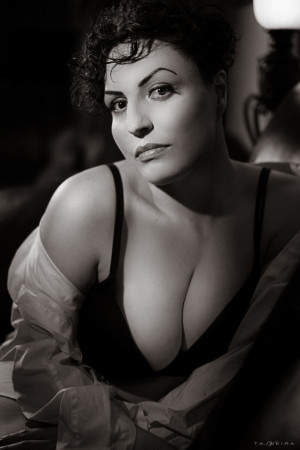 Had a great photo shoot with Geneva last night. A few things that made this shoot awesome:

Geneva, the Best Part of the Shoot

Geneva is one of my favorite people. We’re great friends and have been shooting together over the past four years. Always great to see her, catch up on things, have some laughs and make some great images.

As I mentioned in previous posts, since I made the move to Fuji I’d been a little under the weather and wasn’t able to schedule any photo shoots, so it was great to finally shoot with the X-T1. A different experience than with my 5D Mark II. Actually the shoot was pretty much the same except that I did feel that the smaller size camera body and lenses, in a subtle way, made interaction between me and the model that much easier. It didn’t have that presence of a big DSLR between me and the model. I felt like it kept the mood of the shoot that much lighter, easier. That always helps in creating better images.

The lighting of this shoot was extremely simple. I did a small amount of ambient lighting with a 32″ octabox with continuous lighting, but the main light was a single Canon 580EX II speedlite. But the cool thing about it was that I was using the MagMod grid setup that allowed me to get more of 1940’s Hollywood style of lighting. (Which I love!!)

Here are a few of the shots we got. Click for bigger…