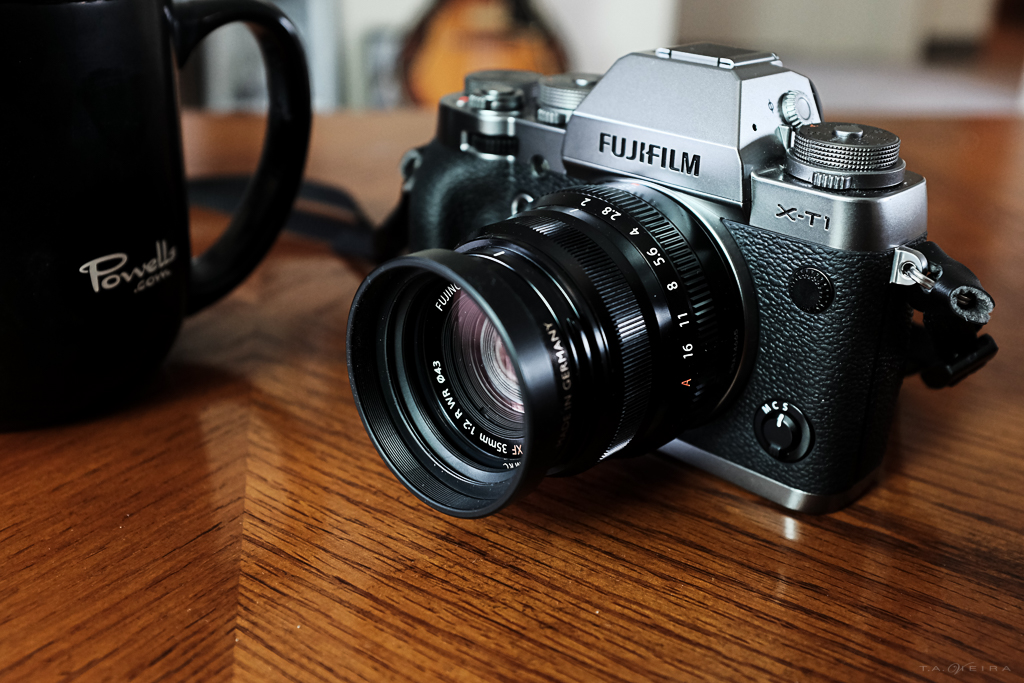 Oh man. I wasn’t going to get this lens. I have the original 35mm 1.4 and love the image quality of that lens. It’s really something special. (you can read my love for this lens here) I However, I’ve heard so many Fuji photographers give such raving reviews of this lens that I had to check it out.

It Got Here a Day Early!

I ordered this lens from B&H and expected it to arrive tomorrow, but at around 4pm this afternoon UPS dropped this (not literally) at my front door. Wow, a day early – that has to be a good omen.

Did I Mention It’s Quiet!

I quickly put the lens on my X-T1 and started taking a few test shots around the living room. Wow, (I’ll try not to use that word too many more times) I could not believe how quiet the focusing is on this lens. Whereas I think the 35mm 1.4 is the noisiest Fuji lens I own. I’ve tried to accept the noise as charming, but I did use that lens quite a bit on my shoot with Geneva last week and the thing was so loud, it sounded like someone was falling down some stairs every time I took a shot! Okay, not that bad, but any of you who own the 35 1.4 know what I mean. It really is a magical lens, but man… Anyway, the new f2.0 version is the quietest Fuji lens I’ve used yet. Significantly quieter than any of my other lenses.

It is really nice that this new lens is one of the weather sealed lenses in Fuji’s lineup. I wish all of their XF series lenses would have this feature. This is definitely a plus when it comes to comparing the two 35mm lenses.

I suppose I could attribute all of this to the weather sealing, but I’ve got the 16mm f.14 lens and it’s weather sealed but it doesn’t have the same tight feel (aperture ring, focus ring, etc.) that this 35 f2.0 lens has. I really like the stiffness of the aperture ring. I’ll be much less likely to accidentally change the aperture with a slip of the ring. Very nice.

The AF on this lens is nice. Faster than the 1.4 and that it focuses so quietly is one of my favorite improvements.

Okay, this is one area in which I wish Fuji could’ve kept the aperture at f1.4. I’ll often do a lot of street photography at night and every little bit of light helps. I’m also a real shallow DOF kind of guy. I like radical bokeh and seeing the background really blurred out, or maybe on a portrait shot have the eyes be sharp but already starting to blur by the time you get to the ears. This is the main reason I went with the original 1.4 version over the f2.0.

All that being said, as much as I crave the shallowest DOF I can get, this 2.0 lens is so wonderful I don’t mind giving up that one stop. I’ll agree with others who have made the comment that even though it is a 2.0 lens instead of 1.4, the bokeh is actually nicer than that of the 1.4 lens.

Overall Feelings About This Lens?

I’ve only owned this lens for a few hours and have only done some night high ISO street shooting with it, so there’s still some more testing to do. But I can say this, as much as I love the 35mm f1.4… I love this 2.0 lens more.

If you’re a huge fan of shallow depth of field and that’s really important to you, if you are trying to decide which version of the 35mm is right for you, take it from someone who puts an ultimately high value on being able to get a very shallow dof and have enough light to do street shooting at night, you owe it to yourself to at least checkout the XF 35mm f2.0 R WR. I think you’ll like it better. .

Here are a few images from my walk tonight. Most are jpegs out of camera (Classic Chrome). A few are edits of the RAW files.

Click on an image and you can scroll through the larger versions.